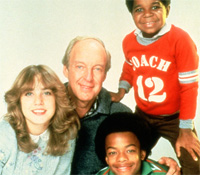 Most television shows should never be turned into movies. But because of the almighty greenback, small-screen favorites such as Charlie’s Angels, Starsky and Hutch, and the forthcoming A-Team have been revived into silver screen blockbusters.

Love it or hate it, Hollywood will continue to recycle tried and true content to make a buck rather than go out on a limb. But there are a few wildly popular TV shows from yesteryear that I just can’t see making the jump.

Diff’rent Strokes. Whoever thought that bad boy Willis would be the “successful” one? The show’s concept of a rich white man adopting underprivileged black boys who have “nothing but their jeans” just doesn’t work in the 21st century. Plus casting for a Gary Coleman clone would be a tall order.

Friends. Where’s Chandler, Monica, Rachel, Joey, Ross and Phoebe now? Nowhere, that’s where! I can understand why people pay to see the SATC girls go buck wild, but very few people would spend the money to watch the homogenous crew slurp down coffees at Central Perk and hear Phoebe’s sings about a stinky pet.

Now there are a few shows that could work.

Golden Girls. As Betty White has proven, old people can be funny – and I don’t mean by laughing at them! Recasting Rose, Dorothy and Blanche would usher in a “new” crop of talent. Seniors certainly don’t have it easy, and the right touch of humor and compassion could flood theaters (especially in Florida!).

Alien Nation. Racism between humans and the Newcomers?! Never! As cheesy as the show was, it explored issues of morality that are just as deep today as they were back in the late 80’s. Today’s special effects could spice the show up and potentially make it a box-office success.

What TV shows do you think should or shouldn’t be made into a movie?