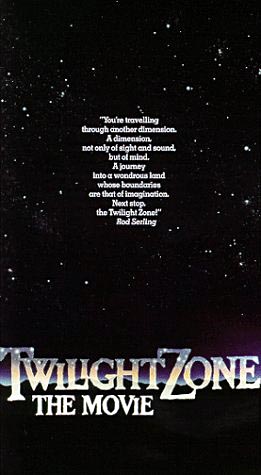 Twilight Zone the Movie attempts to recreate the eerie magic of the original Rod Serling anothology horror series. It’s a memorable film, though not without its set-backs. Twilight Zone the Movie remakes stories from the old television series rather than create new ones. My issues aren’t so much with the fact that it’s rehashed old material, but with the selection of the classic stories, as they didn’t seem to really grab the “cream of the crop”, so to speak. Only one episode is not adapted from the TV series, but even it is a bit mediocre.

The prologue/wrap-around story is one of the better parts of the film. It features Dan Aykroyd and Albert Brooks driving down a lonely highway late at night, talking about television. Eventually, they start discussing the Twilight Zone and certain episodes (some of which I wish they had adapted for this movie). The prologue uses one of my favorite Creedance Clearwater songs, “Midnight Special”, perfectly and even plays it at the very end. From now on, whenever I hear that song, I think of the Twlight Zone. They also play the unforgettable opening narration which does a great job setting the mood and exhuming the nostalgia.

The first story (directed by John Landis), untitled, is very loosely based on the classic episode “a Quality of Mercy”, though not enough for it to be considered an adaptation. In this story, a racist white businessman (Vic Morrow) is forced to walk in the shoes of several different minorities during the worst moments in their history. He is transformed into a black man during a Klan lynching, a Jew during WWII and a Vietnamese person during the Vietnam War. Poetic irony.

This is the most controversial story in the film, as its production was marred by the accidental deaths of Vic Morrow and the two children he was carrying. Due to Morrow’s tragic death, the story had to be completely re-edited, and as a result, doesn’t flow quite well. Particularly the ending, which was completely changed from the original script, and ends on such a terribly dark note that it turns many viewers away. I think it was trying to get across a good message, though the ending sort of kills the “don’t judge until you walk a mile in their shoes” angle and instead leaves you with the message of “make fun of minorities and you will DIE!”

The second segment (directed by Stephen Spielberg) is my least favorite of the bunch, which hurts me to say it, as I love Scatman Crothers (“the Shining”). A remake of “Kick the Can”, a kind-hearted old man (Crothers) visits a retirement home where all the old folks are wasting away their final years. The new-comer encourages them to reclaim the magic of their youth with a game of kick-the-can, though some of the more bitter old timers aren’t very fond of the idea.

This segment is dripping with Spielberg. From the softness of the story to the adorable children, it’s just a little too Spielberg. The bright and sunny atmosphere doesn’t meld with the darkness of the other stories and is anything *but* scary. It was also one of my least favorite episodes of the television series, so I suppose that doesn’t really help. To “Kick the Can’s” favor, though, it has the immortal Scatman Crothers in the lead role and he’s always very charming to watch.

The third segment (directed by Joe Dante) is a remake of “It’s a Good Life”, one of the most classic episodes of the TV series. While at a diner, a young woman encounters a boy who needs a ride back to his home. The woman gives the kid a lift and is invited inside the house, as it is his birthday. She soon discovers the the inside of the home is a bizarre chamber of horrors, as the boy has the ability to make his every thought become reality. The boy’s family live in fear of his power, as terrible things happen when he loses his temper.

Very heavy on the surreal horror, which is just my style. The boy can be terribly annoying at times, but he’s supposed to be, as it shows that living in his own fantasy world has warped his mind. The imagery is very spooky, from people with no mouths, to killer rabbits and giant eyeballs. A few of the effects are a little on the stupid side, like the cartoon monster the boy brings to life (a parody of the Tasmanian Devil) or the part where he warps his sister into a demonic cartoon. I’m also not big on the ending, though I suppose it really isn’t so bad. My second favorite installment in the film.

The fourth and final segment (directed by George Miller) is a remake of possibly the Twilight Zone’s most iconic episode of all, “Nightmare at 20,000 Feet”. A man with a terrible fear of flying (John Lithgow) is put through further torment when his plane goes through a nasty lightning storm. He looks out the window and sees a gremlin on the wing of the plane, tearing it apart. The man attempts to warn people of the danger, but no one will believe him.

The best segment in the movie and, if you ask me, an improvement over the original episode. What makes this version better, in my eyes, is the gremlin. The gremlin from the television series was basically just a guy in a silly-looking monkey suit, and once you got a good look at it, it kind of sucked the terror out of the episode. The gremlin in this version, however, is more devil-like than anything. A very nasty and ugly monster that sort of reminds me of “Pumpkinhead” for some reason.

The Twilight Zone is the forefather of anthology horror and a TV series which continues to withstand the test of time. Twilight Zone the Movie unfortunately, does not have such lasting power. The selection of stories is lopsided in quality and atmosphere, with a weak first half but a wonderful finish.