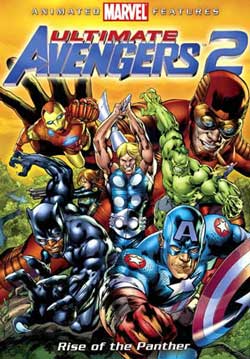 The greatest set-back of the first installment of the Ultimate Avengers animated franchise was the lack of character development or depth of any kind. Like most team-based movies which have to introduce a large cast with limited time, most characters don’t exceed their standard template or most noteworthy qualities. Ultimate Avengers 2, having already established the cast, gets to work fleshing them out into people you might actually care about. It doesn’t do a spectacular job, but it does make them more believable and likeable.

In the isolated African nation of Wakanda, the Nazi General Kleiser (thought deceased) has been stirring up trouble. T’chaka, the Ruler of Wakanda, perishes at his hand, passing the torch as well as the mantle of Black Panther to his son, T’Challa. It gets even worse when Krieger summons the entire Chitauri alien armada (from the previous film) to invade Wakanda. Black Panther goes against his society’s ancient traditions and contacts the Western world, specifically the Avengers, for assistance. The Avengers aren’t getting along, however. Captain America is terminally depressed, Iron Man’s health is failing, Thor is on the bad side of Odin, Bruce Banner has been imprisoned for his rampage as the Hulk and Giant Man and the Wasp are having serious marital problems. If they want to defeat Kleiser, they’ll need to pull their **** together. Um…again.

While the first Ultimate Avengers film combined and adapted the storyline of the first volume of Marvel’s the Ultimates comic book series, Ultimate Avengers 2 is nearly a completely new story. So fans of the comic series can look forward to some new material with only a few elements from the second volume of the comic thrown in. This worked out surprisingly well, as the story is pretty engaging and follows up on the open-ended plotlines of the first film admirably.

I’ve never been a big fan of the Black Panther. Not that I hate the guy, I’ve just never been interested-enough in the character to read any of his comics. This was one of my first real, serious exposures to the T’Challa and I have to admit, I found myself liking him. There were a few elements of the character they didn’t bother explaining in the movie (where did the mystical panther power come from) but I assume a Wikipedia search can answer those nagging questions. The nation of Wakanda was handled well and they work several of its key characteristics (the advanced technology and isolationism) into the film’s established story elements with a decent amount of creativity.

The Avengers from the previous film have more time to themselves in this movie, though a few get a greater spotlight than others. Black Widow, aside from apparently being in love with Captain America, is utterly devoid of any strong character moments, as is Nick Fury. Iron Man has a plot point left open (his health problems) which will be followed-up in the Iron Man solo movie, which will act as a prequel to the first Ultimate Avengers. The Wasp and Giant Man’s marital troubles have been toned down a LOT from their comic book counterpart, so don’t expect anything especially shocking. Still, they were played out fairly well, along with Thor, Cap and Banner. There’s a nice twist to the ending, as well. Maybe not “Oh my God!”-shocking, but a decent turn in the plot.

The animation seemed a bit better than in the last film, though still nothing approaching theatrical quality. The action sequences are animated exceptionally well, but I’m still not a big fan of some of the character designs. The action in the movie is surprisingly violent; you’ll find that out in the first five minutes. A considerable amount of blood is sent splattering, and since the Chitauri are aliens, the animators are free to do all sorts of grotesque and horrible things to them and get by with a PG-13 rating.

The extras on the DVD are alright. You get a half hour documentary focusing solely on the history of the Ultimates comic book. A nice improvement over the documentary from the previous DVD, focusing solely on George Perez’s big fat ego. Mark Millar clears up a number of plot points and tells some good anecdotes. I particularly liked the story behind the backlash to the “Do you think this letter on my forehead stands for France!?” one-liner. There’s also sneak peeks at the upcoming Iron Man prequel as well as a Doctor Strange movie. Those should be interesting.

Overall, Ultimate Avengers 2 was an improvement over the first installment, but only marginally so. At times I felt like I was watching the exact same movie. It gets a solid B rating, but they still haven’t approached any A-material, yet.