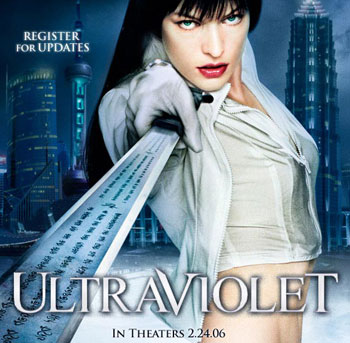 This movie is the definition of “Style over Substance”, but to be fair, the movie is pretty forward with that fact and rarely tries to achieve more than “Ooh, pretty effects!”.

The Substance: Super-Bitch-Warrior-Stereotype, Ultraviolet, is a gun-for-hire in a faux-utopian future society where humans run the world with an iron fist and a race of “vampires” (though they don’t actually suck blood) are slowly being wiped out. Ultraviolet holds the key to uniting the two races, but has to blow stuff up first.

Yes, it’s basically everything you’ve ever seen in the likes of Appleseed, Aeon Flux or any of the most clichéd animes or comic books. But what makes Ultraviolet ESPECIALLY redundant is that those two films I listed specifically in the last sentence were released within a year of this movie. Ultraviolet’s so-called “plot” is just a rehash of those earlier films and offers nothing new to the table, story-wise. But that’s not what makes sitting through this movie worth anything.

The Style: This is what makes the movie worth sitting through. This movie is all about over-the-top, cartoonish action sequences that defy logic unashamedly and certainly keep you from getting bored. You’ve got gravity-defying motorcycles that can drive along the sides of buildings, sub-space pocket dimensions where people can keep guns and machetes, a fight sequence done through the reflection of trendy designer sunglasses (and it works), people running along ceilings, flaming sword fights…just for beginners. And if you ever wanted to know what Snake-Eyes from G.I. Joe would be like if there were six of him and he could transform into a bowling ball, then the first five minutes of this film with answer your question.

It’s as if the director knew this movie had absolutely no story what-so-ever, because the fight scenes are virtually non-stop. This movie sacrifices depth, characters and intrigue for overwhelming amounts of super-powered violence. So if you have ADD, then this movie is right up your alley.

The effects are blatantly CGI, as I assume was the intent. The movie lays it before you in the opening sequence that this film is supposed to be like a comic book (not a very GOOD comic book) and never tries to achieve “realism” with the effects. As a matter of fact, the many imperfections in star Mila Jolovich’s face have been digitally sand-blasted out to make her appear more smooth, shiny and perfect like a comic book character. Unfortunately, no amount of special effects could hide her freakish inability to close her mouth all the way and no amount of CGI could simulate “good acting” on her part.

And believe me, the acting in this movie is TERRIBLE.

So if you missed Appleseed, you missed Aeon Flux, plot is optional to you AND you have ADD…then check this movie out. Otherwise, it’s a very fun, brain-dead action flick, but not even remotely worth the $9 ticket, and certainly not worth the $20 DVD.

So on the “Relative Grading Scale of People Made Out of Food”, a GOOD grade would be “the Stay-Puft Marshmallow Man” from Ghostbusters. However, this was a BAD movie, so it ranks down there as a “Gingerdead Man” with Gary Busey.