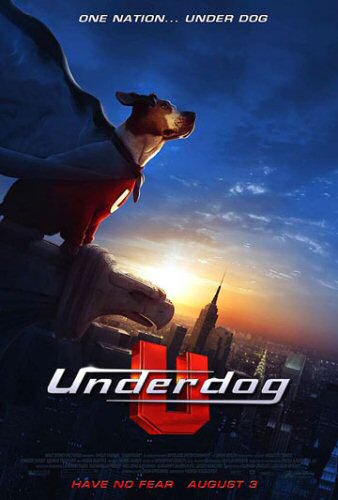 I watched plenty of Underdog when I was a tyke, but he never struck me as one of my favorites. I was always a Super Chicken sort of guy, personally. So I suppose that’s why all these “controversial” changes to the Underdog story and character never really ticked me off like they did so many members of the online Underdog fandom (this fandom exists, I kid you not). At the same time, I guess I can understand their irritation. I blew a gasket in my “Fantastic Four 2” review over the changes made to Galactus, after all. But Disney’s “Underdog” really isn’t geared for the geriatric fans of the 1960’s animated series which has mired in obscurity for many years, but more as a way to reintroduce the character to a new generation of fans and add a new spin to a relatively forgotten franchise. And I can’t really blame Disney for that. Us psychotic adults who sit around watching cartoons and talking about them on the internet aren’t Disney’s target audience; children are. And the kids that were in the theater with me were having a ball with this flick, giggling and cheering and clapping at everything. So hey, mission accomplished, right?

Shoeshine (Jason Lee) used to be a bomb-sniffing canine for the Capital City police department until his sense of smell began to fail him and he lost all confidence in himself. After a run in with the mad scientist Simon Barsinister (Peter Dinklage) and his oafish assistant Cad (Patrick Warburton), Shoeshine finds himself pulsating with a plethora of super powers, yet they mean nothing as he remains his same clumsy self. Shoeshine is taken in by former all-star cop Dan Unger (Jim Belushi) and befriends his son, Jack (Alex Neuberger) whom he shares his secret identity with. With Jack’s help, Shoeshine learns to control his powers and dons the guise of Underdog, Capital City’s new superhero. Underdog is in for a rough time, though, as Barsinister strikes back with his own pack of super-powered dogs and plots to take over the city.

It seems almost odd that Disney, a studio which pioneered films about anthropomorphic animals would do Underdog as a live action film starring a real dog, but honestly, this is the only way a live action Underdog film could ever actually work. And to that effect, “Underdog” succeeds in its endeavor. They manage to take the idea of Underdog and his extended cast existing in the “real world” and craft a decent kid-friendly script around it. It may all be a tad predictable, but this is likely the strongest story a character like Underdog has ever received and it’s perfect for children. There are some “potty” gags about dogs eating poop and sniffing butts thrown in, and while I’m not exactly fond of those, the kids in the crowd giggled themselves silly at each one, and with this being a kid’s movie, who am I to complain?

Just about everything recognizable from the Underdog animated series is worked into the film in some capacity, giving fans of the original series a chance to smile at each reference. Aside from the aforementioned lack of anthropomorphic animals, probably the biggest change to Underdog had to do with his trademark super power pills. They do appear in the movie, but they’re different. I suppose the folks at Disney thought that a hero achieving success through performance-enhancing medication would be a bad influence (insert Barry Bonds joke here).

I actually liked their portrayal of Simon Barsinister and thought they realized both him and his dopey sidekick, Cad, quite well. Speaking of Cad, it’s kind of funny how they did him. He was always a braindead goon in the cartoon and who plays brandead goons better than the very talented Patrick Warburton? But oddly, Warburton plays Cad with a tad more intelligence than his cartoon persona, which struck me as funny. Peter Dinklage plays perhaps a younger Barsinister than I had anticipated but does a fine job of it, working in the “Simons says” bit at the end very nicely. He seemed to scare the crap out of the toddlers in my audience, though.

“Underdog”, however, seems to suffer from a couple cases of miscasting and a couple cases of missed opportunity. Jason Lee never struck me as the right voice for Underdog. He does a serviceable job as the title character, but he never really felt right. Several of the supporting dogs in the film were voiced by Cam Clarke, one of the most talented voice actors in the animation industry, and after hearing his voice it dawned on me…he would’ve been perfect as Underdog. So that sort of bugged me as I sat through the film, hearing what felt like the right voice for Underdog constantly coming out of the wrong characters.

My other nitpick has to do with Underdog’s other arch nemesis, Riff Raff. Barsinister’s evil scheme in this movie revolved around abducting stray dogs and giving them super powers so that he can use them to take over Capital City. Riff Raff appeared early on as a stray dog that kept bullying Shoeshine. One would have expected Riff Raff to turn into a super powered villain at the end, but alas, nothing comes of it. He simply acts as Shoeshine’s trash-talking bully, a far cry from the evil gangster he was in the cartoon. Also, as much as I like Brad Garrett and I do think he was a perfect choice for Riff Raff, this “bully dog” version of the character is far too similar to another “bully dog” Garrett played in the live action “Garfield” movie.

“Underdog” is a good kid’s movie and a fine way to reintroduce the character to a new generation. I don’t really mind the changes and my only complaints lie with a few errors in the casting and a couple missed opportunities. If you have some kids then I’d recommend you take them to see it, because if they’re anything like the kids that were in the theater with me, I’m sure they’ll love it. If you’re a crusty old member of the Underdog online fandom, well, you probably decided to hate this movie long before it ever came out.