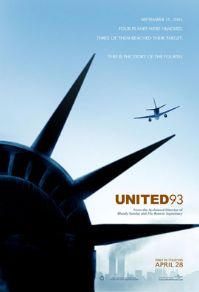 When trailers for Paul Greengrass’s United 93 were first shown in theaters, people booed and shouted “too soon!” When the movie was finally screened for critics nationwide, the acclaim for the film was incredibly positive. Despite the majority opinion that the movie was not preachy nor editorial, most critics (almost certainly liberal) found the space in prose to sneak in their own little, not-so-subtle commentaries about our current politics. And they blame the Bush administration for negating the meaning of 9/11! You ask any sane American “who would be most likely to boo a movie tribute to 9/11?” and it’s a guarantee that they’re not going to say “a conservative.” Conservatives have been trying to preserve the catalystic day of September 11 since day 1. While it is certainly sickening to mention it constantly and as an excuse for the most tangential of decisions, it is no different than a Christian acting a certain way in memory of some guy who got the crap kicked out of him 2,000 + years ago. As a post 9/11 culture caught in the rat race of the information superhighway, we’ve become overly desensitized to WHY we do things. Why we’re in a war, what passions are behind it, what ideologies are at stake, and why we just can’t “move on” from an event that happened 5 years ago. That’s like trying to “move on” from Pearl Harbor and throwing a fit everytime someone mentions it (though I can understand why no one liked that Michael bay film from years ago). It’s incredibly indicative of the current American mindset and our quickness to revert to a mode of comfortability and detachment.

United 93 is a wake-up call to all that.

The movie is a masterpiece of editing, a rationally made movie employing the use of fly-on-the-wall points of view, jerky camera movement, and a relatively unknown cast of characters. Its progression is fluid and brilliantly timed with every single scene serving a function. The film begins with the morning events of September 11 as passengers board their planes, wait in terminals for their flights to lift off, and crew members with their rolling suitcases making their way through the airport. Oh, and a couple of Muslims shaving their bodies and chanting prayers to Allah in the comfort of their hotel room. No conversations at the beginning of the film are meaningful, foreshadowing of the horror to come, or intended to develop character in the strict traditional cinematic sense. Instead, it is the very plainness of their dialogue that makes the characters so real: they talk like you and I. They sleep in the airport, check their phones, read their books, and discuss their day and their jobs. They can’t wait to go home. They hear the food is supposed to be good. These are the things that make the audience empathize with them as United 93 takes off.

When the first plane hits, it is nothing more than a radar blip that vanishes off the screen. No one knows what’s going on and ground control and the military are at a loss, trying desperately to coordinate their information. We, as the audience, know what’s wrong… and it’s undeniably reflexive of what happened on that day as well. None of us saw the first plane hit, but we heard about it from friends, teachers, coworkers, family, and classmates. With televisions turned on, we were there to witness the second plane hit. And it’s the same in the movie, too. All information ceases for an uncomfortable handful of seconds as every eye looks up at the New York skyline to see a plane’s rapid decent into the second tower. When the plane hits (taken directly from the actual footage), you hear no noise… only to be followed with what’s on everybody’s mind: “HOLY SHIT.” And it’s not funny, it’s real. This isn’t a Tom Clancy movie where we can laugh at a character’s reaction in that sense. This is something we all think and it’s unnerving to see life unveil before us a second time, this time as a film based on what truly happened to us on that day. We are automatically thrusted back to September 11 and the film never lets go from there.

As the Muslims on United 93 take over, no P.C. action saves them nor justifies them from their action. They scream in Arabic, they scream Allah’s name, they murder innocent people for glory of their religion. The passengers are scared into submission and you, as an audience member, are there with them. The camera is shaky as we see blood from stabwounds and the frantic movement of the passengers to make their way to the back of the plane. It is at this moment that we never see ground control again: you are there, on United 93, with those poor souls from now till the end of the movie. You have no control in this flying deathtrap. You’re there to watch them cry, watch them make their final calls to their loved ones, and see the unfolding of the choice to make one last move to rise against their oppressors even if it kills them. You see both sides pray, one to the Christian God and one to Allah… and it makes no attempt to equalize the two. They are not the same objective God but two totally different ideologies at war with each other. When our protagonists rise up, it is not painted in the same romanticized flare of reluctancy or understanding that you see in films such as Schindler’s List. It is painted in the most plain yet understandable of dialogue: heroics are simply not necessary to define the moment.

As my friend said after leaving the theater, “that was definitely the most not-fun movie to watch.” And she’s right, it’s not. It’s raw, powerful, and immediately depressing. But it’s also the most important movie, historically, of our generation as a post 9/11 culture. It is also a morally uplifting tale that details the wide range of human emotion in the face of adversity and acknowledges the triumph of humanity as a collective entity over the emotive constraint of fear. And it shows that we are in a war of ideals with the passengers of United 93 being the first to win this pyrrhic victory.

Acting: A+
Aesthetics & Entertainment: A+
Storyline: A+
Recommendability: A+

Following on the heels of “Stay Alive”, “Slither” and “Silent Hill” comes this year’s next big horror movie; “United 93”! Of course, we all remember the heart-pounding teaser trailer we saw in the theaters which had our hairs standing on end. The black screen, the disembodied voices…

And if you thought the teaser was frightening, then that’s only the beginning. Nothing can prepare you for the terror, the gore and the insanity of “United 93”!

As the story goes, four mischievous Gremlins invade an airplane full of cell-phone gossiping yuppies and gradually turn reality (and the plane) upside down with their rascally hijinks. But these Gremlins are no whacky funsters; they’re actually being controlled by dark forces from beyond, who are instructing them to rain Hell down upon the heads of humanity! The passengers of United 93 have to learn to put aside their racial differences (the black comedian making jokes about white stereotypes was HILARIOUS, especially the way they paired him up with a boring Caucasian business-man) and band-together to thwart these menacing monstrosities. But secrets are revealed about the origins of these strange creatures who talk just like Q-Bert, and you won’t be sure who’s truly good and who’s truly evil.

This is the most original horror movie of the year, packed with action, scares and disturbing monsters. It’s also a super-charged action movie in the vein of “Die Hard 2”, “Air Force One” and “Con Air”. There are explosions a minute and gore a-plenty. This movie has it all!

And it’s not just about the action or the scares, either. The villains of the movie aren’t your typical bad guys. Much like the Joker and Batman, these Gremlins are revealed to actually have been created by the VERY enemy they’ve sworn to destroy! That’s right! Democracy birthed these hideous fiends and now they seek to destroy their creators! With moments such as the Gremlins calling their families to tell them they love them, or praying in their beds, or just interacting intelligently amongst themselves, you truly feel sorry for these characters and wonder who the REAL monsters of the movie are.

It should also be noted that this movie takes place sternly within the Star Wars universe. They aren’t obvious about it at first, but when the Gremlin hijackers start screaming “Ackbar!” into their radios over and over again, you finally realize that they’re not Gremlins at all; they’re Rebel warriors under the command of Admiral Ackbar, fighting the tyranny of the evil Galactic Empire! After that you finally understand that THEY’RE the heroes and the people on the plane, trying to scald them with hot coffee, and the people on the ground, desperate to blow them out of the sky, are really nothing but Storm Troopers out of uniform! Additionally, you’ll cheer when they show the Death Star III getting blown to smithereens by Luke and Lando. I’ll tell you what, I never saw that one coming.

It takes a deep, sophisticated, truly inspired movie to take the villains you’ve sworn to hate, Gremlins hell-bent on mass-murdering thousands of “innocent” people, and tell you that they have feelings to, that they’re just as human as you and me, that they’re OUR responsibility because WE created them, and that we should feel sorry for them and the way they died. Simply brilliant.

This was a moving, terrifying, well-rounded horror epic which belongs on any fan’s shelf right next to “Night of the Comet”, “House of the Dead” and “Rock & Roll Nightmare”. On a scale of 0 points to 100 points, I give it 60 Thousand Gazillion! See it now!