Jet Li has not had a decent American movie since Kiss of the Dragon, and even that was not a decent example of the martial arts showmanship he is known to possess. We will forget Cradle 2 The Grave. And Hero was not an American movie. 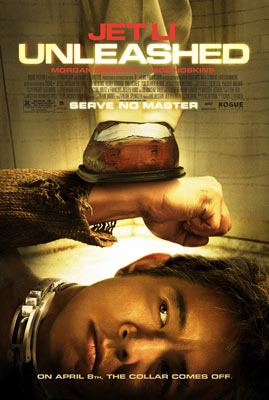 Unleashed is a welcome return for Jet Li. Written by Luc Besson, you know that the plot will involve something rather simplistic and not your usual over-the-top intrigues that action movies are often fond of. The Hong Kong title of this film is Danny the Dog, which is probably more telling of its plot than Unleashed is. Bob Hoskins plays the bad man who happens to have a most unusual ace up his sleeve: a young man, Danny (Li), who has been trained from youth as a dog, conditioned to tear into people with ferocity and efficiency. Danny does this for the first part of the movie until he stumbles into a blind Morgan Freeman, the only person to show him any sense of human dignity. Oh, and how to play the piano. Something goes wrong and Danny finds himself under Freeman’s care, trying to fight off his conditioning and embracing humanity. And Freeman’s daughter.

There is a lot of extremely raw fighting. Unlike Li’s previous work which involves beautiful choreography and a ballet of punches and kicks, Unleashed gives us extremely brutal street-fighting that is not afraid to get down and dirty. Danny and co. are not ahsamed to resort to hair pulling, stomping, and pulverizing an opponent even when they’re down. It is only at the end that we see an outrageous close-quarters kung fu fight in an enclosed space (a bathroom stall). But the action of the film would not be complete in a Besson work if it was not accompanied by calm moments of character development. The familial love between Freeman, his daughter, and Danny is genuinely there for a reason. The master-and-commander relationship between Danny and Bob Hoskins is there for a reason as well. And to bridge both is Danny’s struggle for humanity and some pretty wicked fight scenes.

Unleashed is a welcome staple of Jet Li’s work for both the uninitiated and fans alike.