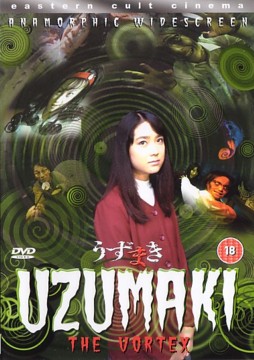 For anyone who has ever read a story by H.P. Lovecraft, or ever been interested in surreal, gothic, mind-bending horror, this movie is for you.

The plot is very reminiscent of “The Shadow over Innsmouth”, one of Lovecraft’s most famous tales (and poorly adapted into the Brian Yuzna film, Dagon). Essentially, a small fishing village deep in the rural outskirts of Japan has been experiencing some very bizarre phenomenon. One by one, the townspeople become obsessed with spiral patterns of any kind. A young girl and her boyfriend become particularly concerned, as the boyfriend’s father seems to be at the epicenter of this phenomenon and has become violently obsessed with it. Eventually, as the epidemic reaches its climax, townspeople begin to suffer spiral-related deaths (like being ground up in the tire of a moving car), or even change into grotesque, giant snail-monsters.

The movie is VERY strange, both in story and appearance. Being inspired by the writings of H.P. Lovecraft, the audience is treated to some of the most surreal and gruesome deaths you’ll ever see on film. I won’t spoil it for you, but one of them involves a washing machine, broken glass and a camcorder.

This movie isn’t for everyone, I suppose. Some fans prefer their horror movies to “make sense”, and Uzumaki is decidedly abstract. And yet others will never give the movie a try because it is in Japanese and they don’t like subtitles. And in addition to that, there are those out there who hate H.P. Lovecraft’s style of story-telling and will thus be turned off of the movie at the mere utterance of his name.

But overall, this is the kind of bizarre, surreal horror movie that is best watched at 3 in the morning, when you’re all alone in the a dark house, deprived of sleep and despite all common sense, you become paranoid and creeped-out by every little noise.

I give it an A-. The best H.P. Lovecraft-inspired horror movie since John Carpenter’s In the Mouth of Madness.