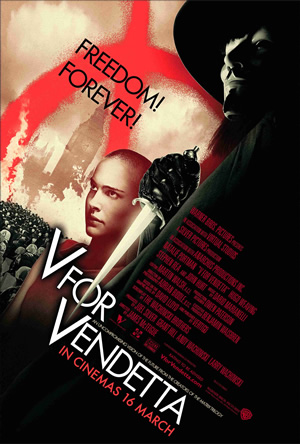 Remember, remember, the 5th of November
Gunpowder, treason and plot;
I know of no reason, why the gunpowder treason
Should ever be forgot.

The beginning of V for Vendetta starts with an introduction to the real-life notorious 17th century British conspirator Guy Fawkes and his failed attempt to blow up Parliament. Having been caught and apprehended, Fawkes is hanged. A monologue tells us that Fawkes, like all true patriots, represented an ideal that could not be destroyed. It is this theme that gives purpose to the main character of V (Hugo Weaving), who apparently desires to finish where Fawkes left off by blowing up Parliament in a fascist, future rendition of London.

V for Vendetta is a dangerous film, not because it’s going to incite people to try and blow up the White House or even convince people that terrorism is a good thing, but because it is the type of movie that attempts (almost successfully) to make an allegory out of misconceptions and misinformation. It is the equivalent of anyone making a big-budget movie about how Chicken Little heroically tries to tell the truth that the sky is falling when, in reality, the bigger issue is if the sky is actually falling or not. The propagation of any information without having established the veracity of said information is perhaps the most dangeous type of information at all.

In the film, V is the victim of genetic experimentation perpetrated by the government and is the only survivor: he apparently has super-human physical attributes and is extremely intelligent. The London of the future is a fascist one but we do not see enough of the people to really get the sense that it is a society where the people live in fear: when we do see people, they’re at home and watching TV just as any present-day family would. Heck, even old folks in the nursing home are still around in this film. Evey (Natalie Portman) is almost raped by government officials in a back alley when V comes to her rescue. In the course of the film, Evey becomes V’s protegé as V reveals his year-long plan to not only wipe out the key members of the fascist government but also blow up Parliament on the 5th of November.

Alan Moore, who wrote the graphic novel in 1982, has taken his name off this movie and wants nothing to do with it. That should automatically raise some eyebrows. Moore had written the novel in part as a response to the conservative Thatcher government, but it was not a full-blown political agenda. His V for Vendetta was more inline with the themes seen in George Orwell’s 1984 and was clearly a message about two extremes: Anarchy versus Fascism. Though Moore professes to be an anarchist, he wrote the character of V to be openly interpreted and with enough problems of his own to show some of the view’s shortcomings. Like Watchmen, Moore’s V for Vendetta simply posits the rhetorical situation of two extremes at war with each other and does not seek to objectify a morality to either (which one is good and which one is evil).

The movie remains true to the book only by its plot progression, not by its inherent insinuations. The fascist government of the novel is based on Nazi Germany. The fascist government of this film is obviously based on the typifications of the Bush administration and neo-conservatism in general, thus flipping the original “Anarchy versus Fascism” motif into that of “Liberalism (Good) versus Conservatism (Evil).” The Koran is mentioned as being appreciated for its “beauty” and later on as being the possession which warranted a character’s death, thus insinuating that this is a fascist government based on a demonized view of Christian fundamentalism. Homosexuality is also depicted in this film as something beautiful and condemned by the government as being a sure ticket to the concentration camps. The problem with the shift from the fascism of the Nazi party to the slippery-slope fascism that some see in conservatism is that the Nazis detained and executed homosexuals not due to the morality of gays but because the nature of homosexuality interfered with the plan for racial purity and the propagation of the Aryan ideal. The shift from racial ideology to fundamentalist ideology gives the film a definite anti-Christian spin and implies that to not accept homosexuality, even on a moral basis, automatically puts you on the side of the concentration camp scientists.

The novel’s government, Norsefire (an allusion to the Nazi’s attachment to Norse mythology), is a full-blown fascist regime replaced here with the laughable typification of how liberals currently view the Bush administration. The black hoods over prisoners, the mentions of wire-tappings, the allegations that the government was responsible for terrorist attacks on its own people, and the consistent screaming and shouting of the head chancellor are all vicious and ham-fisted mockeries of the Bush administration. Every character has an articulate voice and a chance to develop except the fascists: they’re not even characters, they’re stereotypes. Not that fascists should be given the moral equivalence of our protagonists, but you still want to establish character perspective (even with villains).

The supposed “uncompromising vision of the future” that the tagline suggests is more like “the slippery-slope, liberal-conspiracy-loving-theory-of-the-future” that the uninformed college student would write about in his angst-soaked, teary essay to a board of college professors who would hail his essay (and the other 3 million essays by “oppressed” college students across the nation) as the equivalent of the proverbial finger against the wicked and mean conservative government. When you unveil this film for what it is, it’s nothing more than a person fighting shadows.

I guess I should start this off by saying I’ve never read the DC/Vertigo comic in which the movie is based. I’ve always wanted to, as I think Alan Moore is one of the finest comic book authors to ever grace the planet, but never got around to it. As it stands, it is probably best that I DIDN’T read the source-material for this movie, as apparently the two are vastly different and fans (and Moore) are outraged over the changes.

Be that as it may, I thoroughly enjoyed this film. The trailers are disgustingly misleading, with hard-rock music blaring in the background as V (the title character and hero of questionable ethics) throws knives in bullet-time clichés while stuff blows up everywhere. The trailers make this film out to be more hackneyed comic book tripe no better than Fantastic Four, Daredevil or equally recycled garbage.

This film is, in fact, nothing like the trailers would have you believe and rises far above the expectations of “just another comic book movie”. V for Vendetta is a commentary on politics, how much blind trust people should have in their government, what makes a person a “terrorist”, how a point of view can make all the difference and, I am certain this will instantly turn off a vast majority of movie-goers, a critique of the Bush Administration and a parody of current events.

I admit, that last part is enough to drive a lot of people away and I can’t say I really blame them. There’s so much high-profile “Bush-bashing” out there it’s difficult to tell what’s meaningful and what’s just more lazy satire for the sake of being topical. But also factor in the bit about “how a point of view can make all the difference”, and while one can view the commentary in this film as “Bush-bashing”, others can find something a tad deeper in it all.

Just to get it out of the way, the plot is like so; the people of England have put far too much blind faith in their government, both out of fear and laziness, and as a result their democracy gradually transformed into a brutal dictatorship. People can live, work and love as freely as they want, so long as they abide by “the rules” and conform to the government’s very exacting standards. That means no homosexuals, no questioning the way things are run, no religion that isn’t Christian (possessing a Koran means immediate execution) and absolutely no resisting “The Fingermen”, the Government’s power-tripping law-enforcers.

V is a man whose identity was lost when the government chose to use political prisoners (mostly people who broke those first two “rules” I listed above) as guinea pigs for various experiments. V was badly scarred in a fire at the death camp, but managed to survive. Donning a mask of Guy Fawkes, the notorious British “traitor”, he embarks on a war not only for revenge, but to open the eyes of the people living in the English dictatorship and inspiring them with the strength to resist.

It all may sound a bit predictable, but V for Vendetta is far more intelligent than movies with similar settings, like Ultraviolet and Aeon Flux. The blame for the country’s predicament isn’t squarely set on the Dictator, or the government, or Bush, or Christians, but rather the bulk of the blame is laid upon the citizens of England, who looked the other way and gradually gave their government the power to make their decisions for them just because it was easier than doing it themselves.

And to increase the film’s believability, it isn’t set in some futuristic techno-world, nor is it set in some grim and gritty war-torn environment. Actually, England is rather contemporary, clean and just…normal-looking. The setting isn’t over-the-top, it’s credible.

V, himself, is possibly the best part of the film. He is extremely articulate, very well-educated and can deliver more touching emotion in that static Guy Fawkes-mask than most of Hollywood’s “A-list” flavors of the month that get so much credit. His dialogue is what makes him so charming, and he delivers some of the most philosophically-intriguing and memorable lines you’ll ever see in a film made in this era of explosions, explosions and more explosions.

As a matter of fact, even the explosions in this movie are driven by symbolic meaning and never happen without purpose.

The true crime is that this is a movie most people are going overlook, be it that it’s “just another comic book movie”, “stupid Bush-bashing” or maybe that they just hadn’t heard of it thanks to some terrible marketing. Regardless of how many people this movie managed to reach, by the time it reaches its conclusion, it is sure to make you consider thinking for yourself and question why you’d let anyone else do it for you.

So on “The Relative Grading Scale of Super Mario Villains”, a BAD movie would rank as a “Lakitu”, but this was a GOOD movie, so it gets rewarded with a “Buzzy Beatle”.