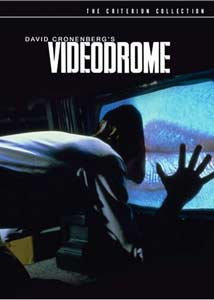 “Long live the new flesh!” There’s something about David Cronenberg movies that just make you feel…icky. And it’s not just the gratuitous gore, either. Cronenberg knows how to saturate a film with filth and grime. He even goes so far as to add the most revolting sound effects to the most mundane of things. When people kiss they make these awful slurping noises that thoroughly suck all the romance out of the romance. And that’s one of the things I love most about Cronenberg films. He makes me feel like I need a shower afterwards.

Max Renn (James Woods), a sleazy president of a controversial cable network, is constantly looking for new programs with which to raise the bar for sex and violence on television. While using a pirate satellite dish, Max comes across a show called “Videodrome” consisting of no plot other than human beings being brutally tortured. Max becomes obsessed with the show and is determined to track it to its source. However, the more he watches Videodrome the more his reality begins to unravel. Soon, his life becomes a mess of hallucinations which gradually chip away at his sanity.

One of Cronenberg’s more psychedelic offerings (though not as incoherent as “Naked Lunch”), Videodrome is a commentary on the American appetite for pain and misery. We’re constantly wanting more violence, more sex, more gore, more everything. Every time we cross one line, engage in one taboo, we immediately begin searching for the next one. Videodrome is a frightening look at where that mentality will eventually lead us. Videodrome, made in 1983, is a startling prediction of the reality television craze that’s still sweeping the country. People watch shows like Survivor, Cops or American Idol to see people get hurt, publicly humiliated or put through great hardships for our viewing pleasure. The Videodrome television show within the movie is a glimpse at what that mentality will eventually boil down to some day: watching human beings tortured and murdered for entertainment.

But there’s even more to it than just that. Videodrome also focuses on the desensitizing effects of television violence. The more television we watch the more we lose touch with reality, and gradually television becomes our reality.

James Woods delivers a stellar performance as the lead character, and when combined with the bizarre special effects and camera work, the audience really starts to feel like its going crazy, too. There is lots of gruesome imagery in the movie which go beyond torture and rape and into the surreal. James Woods is transformed into a “human VCR” or sorts, with the brain-washing effects of the mass media inserted into him like a video cassette. And he likes it. And honestly, I’d like it, too. Half the movies I review for this website are horror-related. I can’t get enough pain and violence.

On a personal note, the movie is very nostalgic for me as it features Beta cassettes consistently throughout the film. My family wouldn’t let Beta go, even after it became obsolete, and we used it regularly through 1998 (renting VHS tapes and copying them onto Beta cassettes).

Videodrome is a surreal mind-bending masterpiece, packed to the brim with social commentary and frighteningly accurate predictions of the future, which happens to be our present. It gets no less than an A, maybe even an A+. A damn good movie.