What Are We Waiting For?

Do you trust your waiters at your local restaurant? Sometime in high school, we are enlightened by the revelation that your food may not be safe to eat. Maybe it’s because you pissed off the waiter or because the chef just doesn’t like you. In any case, I don’t think that has stopped anyone from eating at a restaurant or made anyone think twice about the special ingredients in your chicken parmesan. Perhaps it’s because we don’t think that these sickening stories could ever happen to us. And that’s probably the sick reason why anyone would want to see a movie such as Waiting… 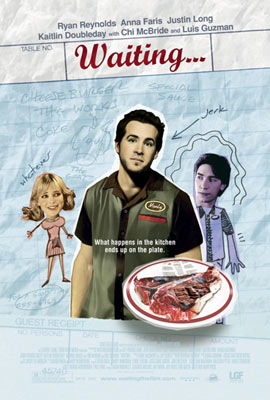 Unfortunately, if you are looking for the visual sight gags that you would expect in a gross-out comedy set in a restaurant, you’re probably going to be disappointed. Waiting… promotes itself as a comedy but is obviously not on the same page as recent hits such as Wedding Crashers and Dodgeball. The opening is a fair indicator that there is something else to this movie: the credits are written in the same font as the sitcom “Friends” and occur as we see a bunch of high school and college kids attending a local party at some guy’s house. So it’s an independent movie through and through: but is it funny?

The dialogue is delivered in the same edgy and cocky tone that you would expect from Ryan Reynolds, who basically plays himself in every movie. Luckily, we don’t have to listen to him the whole time. You have the cussing, anger-management-needing Naomi (Alanna Ubach), the Oreo busboys Nick (Andy Milonakis) and T-Dog (Max Kasch), the semi-slut Serena (Anna Faris), and the crude, perverted chef Raddimus (Luis Guzman). That doesn’t necessarily mean that they’re flat out hilarious. If anything, you will fall in love with their character interactions more than any of the laughs that they try to get out.

Then there’s Dean (Justin Long), the typical indie-movie protagonist who starts the day by finding out that his classmate is a big shot while he’s just a lowly waiter at Shenanigan’s. The day (and movie) then turns into a journey of self discovery as he decides what to do with his future. Yawn.

There are laughs that involve the intentional viewing of testicles and Ryan Reynolds’ fixation with high school girls, but for the most part don’t expect to be wetting yourself from laughing so hard. Waiting… is an exploration of character interations in a boring and stressful, atypical restaurant environment and not the over-the-top comedy that you may expect it to be.