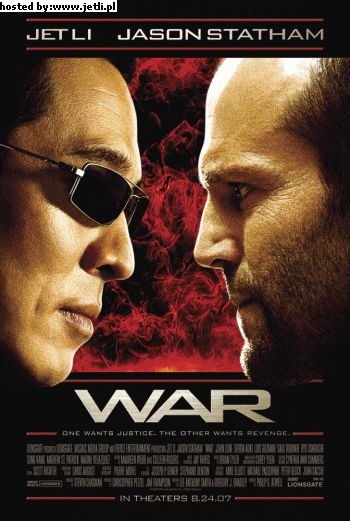 Just what the action genre needs, another high-octane thrill ride featuring a loose-cannon FBI Agent on the edge that plays by his own rules and has sworn to mete out justice extreme-style. I’ve seen this movie so many times before I’m really getting sick of it. Philip G. Atwell’s “War” is a wretchedly textbook action flick that manages to hit every cliché at least a half dozen times without remorse. Just about the only ones this movie lacked was some dialogue along the lines of “You should have killed me when you had the chance” and maybe a scene where the hero falls to his knees and raises his fists to the sky, screaming “Noooooooo!” Perhaps in the sequel…

When Yakuza hitman Rogue (Jet Li) kills FBI Agent Tommy Lone (Terry Chen), his partner Jack Crawford (Jason Statham) swears vengeance…deadly vengeance. Three years later, Rogue resurfaces in San Francisco, playing both sides of the brutal war between the Yakuzas and the Triads. Agent Crawford and his crack team of two-dimensional stereotypes get on the job, determined to bring the elusive Rogue down and hopefully take San Francisco’s oriental mafias with him.

Director Philip G. Atwell manages to craft a story with all the flash and substance of a Kanye West video. Gangsta and techno music drones on endlessly, interspersed with chaotic and completely random cuts of expensive sports cars, rims and Hip Hop honeys. I dunno if Toyota had Atwell on the take or what, but those completely pointless flashes of their latest models just sitting their in peoples garages not doing anything even remotely essential to the plot were just…intellectually insulting, to put it mildly.

I’ve already harped on the merits of the tired old “loose cannon cop/FBI Agent on the edge” cookie cutter plot, but I’m not through yet. I can usually take that kind of hackneyed and creatively bankrupt story, simply shrug it off as a “popcorn flick” and try to enjoy myself…so long as the Director brings something even remotely new or original to the table. Proving his cinematic talent or lack-there-of, Atwell brings nothing substantial to the storyline save for a fairly eye-rolling twist ending that requires quite a few leaps in logic and brain power. Even the action in this movie is entirely by the numbers without a single wholely unique fight scene to speak of.

Honestly, you’re better off renting “Dirty Harry”, “Death Wish”, “Traxx” and a couple 50 Cent videos and then splicing scenes from them together at random before sitting down to watch. You’ll get pretty much the same result as “War” but at least your version will have some camp value to make it marginally entertaining. “War”, sadly, doesn’t even have that going for it.