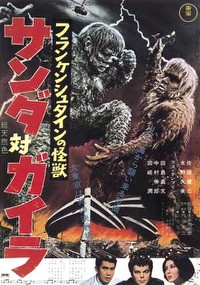 Sanda and Gaira, the two Gargantuas, weren’t the most exciting Kaiju in the world, though. The thing that made Frankenstein interesting in the original was his human-like ability to perform strategy and his incredible healing factor that had him instantly recover from the most brutal attacks (think “Deadpool”, the Marvel Comics character). Sanda and Gaira lacked the strategy and brain-power and were given a watered-down version of Frankenstein’s healing factor. So they were just like Frankenstein…only not as good.

Still, the movie has its moments. Gaira ranks as one of the most evil kaiju I’ve ever seen in a Showa movie. Unlike most bad guys who just topple over buildings and step on people, Gaira actually EATS humans. He goes into cities and villages, plucks them out of their homes and chows down. Brutal. Particularly the scene where he reaches into a skyscraper, pulls out a woman, gobbles her up and then spits out her clothing. Damn.

There’s also a really well-done scene involving Gaira, where two sailors are taking their fishing boat out to sea when one of them looks over the side and sees Gaira beneath the waves looking back at them. It was done REALLY well and might be the closest the Showa series ever got to “scary”.

As a follow-up to Frankenstein Conquers the Earth it answers a few questions but raises many others. Sanda was grown from Frankenstein’s severed hand (seen cut off at the research lab in the last movie), but for some reason after he grew himself back completely he looked more like a chimpanzee than Frankenstein. Gaira was grown from cells of Sanda’s that got carried out to sea and mixed with plankton to create a sea-monster Frankenstein. And we still never learn the where-abouts of Frankenstein-himself, who disappeared at the end of the last movie.

As far as the “War” goes, Sanda is basically the good guy and Gaira is his evil twin. They start out like brothers but once Sanda discovers Gaira eating humans for lunch they throw down. The War-itself is pretty weak. Neither of the Gargantuas has any special powers so it looked more like two guys in furry costumes wrestling for 10 minutes. The ending is pretty spontaneous and forced. They carry their fight out to sea and then get caught in an undersea volcanic eruption (convenient!) and get buried in magma.

Aside from the ending, the movie is pretty good. Not as good as Frankenstein Conquers the Earth, but not a bad film either.