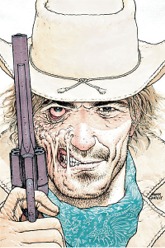 The guys behind Crank, Mark Neveldine and Brian Taylor, have been tapped to adapt Jonah Hex to the big screen according to Newsarama. Jonah Hex is a long running comic book series that first started in All-Star Western #10 in 1972. The character later graduated to his own series, which ran for 92 issues.

Later incarnations of the character put him in a “Mad Max” styled future, and then later again, back to his original setting of the Old West. Supernatural elements have been introduced from time to time, and it looks like those elements will spill over into the movie.

No word yet on casting, although I’d love to see Crank star Jason Stathem don the cowboy hat.