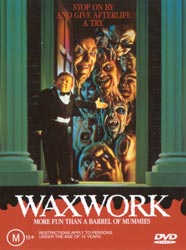 Waxwork is a horror movie that doesn’t get a lot of credit, but at the same time, it only deserves so much. It has a fairly novel concept, some decent special effects, some very stomach-churning gore and at least one good actor. Yet, at the same time, it’s full of hackneyed scares, bad jokes and a cast that mostly consists of high school drama class drop-outs.

A new wax museum opens up in a California suburb, and a group of rowdy teenagers are invited in by the eccentric caretaker (David Warner!) free of admission. The wax museum is most-unusual, as it is a hall of fame for classic movie and literary monsters. Strangely, though, all the wax displays lack a victim. The kids are each drawn into a different reality and succumb to the monsters within, becoming a part of the wax display upon their deaths. As it turns out, the caretaker needs the souls of human beings to set the monsters in the wax displays free to roam the Earth. And his collection is almost complete…

The plot is actually rather cool, offering you a dozen different horror movies in one. Some of the horror movie displays are classics, like Dracula, a werewolf, a mummy or the Phantom of the Opera. Others, based on more modern copyrighted material, like the Little Shop of Horrors, appear as parodies. You still get a lot of different horror movie villains all in one, which should keep you from getting bored.

David Warner is the only redeeming cast-member, to be honest. He adds a touch of class to any movie he’s in, though I don’t think even the Queen of England would have had enough class to offset the losers that made up the rest of the cast. But hey, there’s a midget in there, somewhere!

The effects are all pretty low budget, but not terrible. Some come off better than others. There are a few moments of gore that might make one queasy, such as the “steak tar-tar” sequence. I’ll leave it at that. The final battle is preposterous, though, with characters making some of the stupidest one-liners since “**** you, Lucky Charms” was uttered at the end of Leprechaun. It makes me cringe every time.

Waxwork is a decent horror movie with a lot of potential, most of which it lives up to. I’d give it a C, but mostly for David Warner. Also, avoid the sequel.