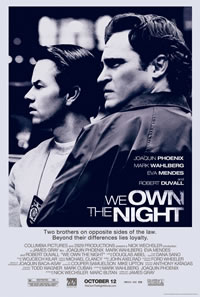 The trailers gave me a pretty uneven impression of this movie. It looked fairly mundane, the usual “one brother is good, the other is evil, and now what has brought them so close together threatens to tear them apart” Hollywood tripe I’ve seen a thousand times over. The sight of Eva Mendes in a starring role didn’t draw me any closer, as I honestly believe that next to Kirsten Dundst, Eva Mendes is the worst actress of our times. Well, “We Own the Night” turned out to be one of those rare surprises, I can say with relief. I wouldn’t rank it among the best pictures I’d seen this year, but it certainly wasn’t the grueling experience I was dreading.

Bobby Green (Joaquin Phoenix) runs a Brooklyn nightclub in 1980’s New York. He enjoys drugs, booze, all that good stuff. His brother, Joseph (Marky Mark Wahlberg), is a by-the-books cop, out to bust a major Russian narcotics ring which has connections to Bobby’s nightclub. So, naturally, the two don’t get along. That all changes when, thanks to Bobby’s apathy, Joseph takes a bullet from a Russian hitman who happens to be one of Bobby’s pals. Bobby has a change of heart and vows to help his police officer father (Robert Duvall) take down the Russian mob, even if it means putting his own life in jeopardy.

Yeah, I know, the summary sounds hokey and derivative as all hell, but trust me, Director/Writer James Gray manages to take a color-by-numbers Hollywood plot and work it out into something that commands your full attention. The whole “two brothers not seeing eye to eye” bit doesn’t absorb as much of the plot as the trailers would have you believe. Joseph is injured fairly early in the story and the plot of the movie revolves almost entirely around Bobby and his sudden revelation that what he’s doing with his life is wrong. Eva Mendes, Bobby’s girlfriend, actually gets more screentime than Marky Mark (not that that’s a good thing, mind you).

James Gray goes the extra mile to try and keep things as “real” as possible. There are scarcely any over-the-top cinematography or epic action shots; its all very closed in and personal. While this might sound kind of drab, it lends credit to the realism of the story. The “boxed in” feel puts the audience in the shoes of the lead characters, allowing you to realize how mortal they all are. Probably the best use of this technique was during the car chase sequence in the last quarter of the film. Seldom does the camera leave the confines of Bobby’s car as he’s being chased by the enemy down a busy highway in pouring rain. The excellent use of muffled sound makes you feel like your right there in the car, about to collide head-on with a truck. That was certainly the part of the movie which stuck with me the most.

While the movie is more about one man having his eyes opened than two brothers fighting with each other, “We Own the Night” does fall into some Hollywood ruts. It can be somewhat predictable and there are some rather poor leaps in logic. An elderly Russian mobster trusts Bobby like a son, but never does a background check to see he has a father and brother in the Brooklyn PD? I’ve already harped on Eva Mendes, but her performance actually manages to make all the other actors in the room look as bad as she is. Eva Mendes is fine if you want window dressing, just don’t let the lady talk. I was also a bit let down by the ending. Well, there were things I liked and hated about it. Gray takes his “realistic approach” with how the villain is dispatched, but he simultaneously mixes in some eye-rolling Hollywood schlock that had all the patrons in my theater groaning “don’t go in there, you idiot!”

“We Own the Night” was a 90% good movie with complaints being few and far between. It’s probably best enjoyed as a rental, but definitely a flick worth checking out in your spare time.