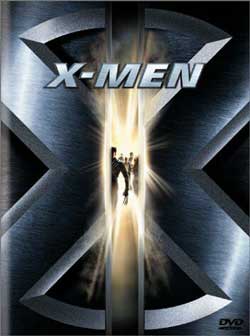 I owe a lot to the X-Men. Uncanny X-Men was the very first comic book I ever read and was what got me into comic books in general. When I heard they were making a live action film I could hardly believe my ears. I mean, prior to this, the only live action X-Men offering available was the Generation X made-for-TV movie where a horde of teenage mutants battle the villainy of Matt Frewer. 2000’s live action X-Men film gets a lot right and even makes a few improvements here and there (some of which were even ported into the X-Men comic book). At the same time, there are a few aspects which could have used improvement and several missed oppertunities. Still, considering the vastness of the X-Men mythos and the limited amount of time offered in a feature film, the final product is very admirable.

In the not-too-distant future, mankind has achieved its next leap in evolution: mutants. Mutants are people born with superhuman abilities. Logan (Hugh Jackman), also known as Wolverine, is a mutant with a super healing factor, hightened senses and an indestructible adamantium skeleton grafted onto his bones. While making his way through Canada, he encounters another mutant, a runaway named Rogue (Anna Paquin) who has the unfortunate ability to drain the lifeforce of anyone she touches, as well as their mutant powers. Shortly after meeting, Wolverine and Rogue are attacked by a giant villainous mutant and rescued by a team of leatherclad good guys. They are the X-Men, students of Professor Charles Xavier (Patrick Stewart), determined to keep the world safe for humans and mutants alike. Xavier runs a school for mutants, to help them learn and hone their special abilities. Wolverine is invited to join the X-Men, who consist of Cyclops (James Marsden), their leader who can fire optic blasts, Jean Grey (Famke Jansen), Cyclops’ girlfriend with telekinetic powers, and Storm (Halle Berry), who can control the weather itself. Standing in their way is Magneto (Sir Ian McKellen), the master of magnetism, and his Brotherhood of Mutants who wish the purge the Earth of humanity. The Brotherhood, who consist of Sabertooth (Tyler Mane), the ferocious wildman, Mystique (Rebecca Romijn), the shapeshifter, and Toad (Ray Park), the leaping limey with a twelve-foot tongue, are about to implement a plan which will murder thousands…unless the X-Men can stop it.

It sounds like a comic book plot and it’s honestly executed like a comic book plot. And, you know, when you’re making a comic book movie, that’s really not a bad thing. The story isn’t going to appeal to everyone, as it really does have a Saturday Morning Cartoon-feel to it. However, for fans of the X-Men or just those who enjoy superhero films, this movie is extremely pleasant.

Wolverine takes the spotlight, which irks quite a few people, as Wolverine tends to be terribly over-exposed. Yet, he’s the most popular X-Man for a reason, and giving him the lead role in the film isn’t anything terribly surprising. Hugh Jackman gets the part down to perfection, bringing Wolverine’s lovably gruff personality to life. James Marsden is stiff as a board, and you know what, nothing embodies the character of Cyclops more accuractely. Patrick Stewart was born to play the part of Professor X and people have been wanting him for the role since the early 90’s. Ian McKellen is an older-looking Magneto but much more accurate to the character in a real-world setting, considering his history in the Holocaust. Rabecca Romijn is totally hot as Mystique. Ray Park actually makes Toad a threat for the first time in the character’s history, and while he doesn’t get many lines, his acrobatic presence is very commanding. Halle Berry is the only real drawback, though to be fair, she doesn’t have the best material to work with. She certainly gets saddled with the absolute worst line in the entire movie.

I love the action in this film, and every headlining mutant gets their moment in the spotlight. The fight between Wolverine and Sabertooth on top of the Statue of Liberty is one of the best. They only hint at a deeper history between the two characters, which is a shame as their rivalry is one of the better dynamics in the comics, but again, they only had an hour and a half to work with. Toad’s fight with Cyclops, Jean Grey and Storm is my personal favorite, though, just because it’s freakin’ Toad and he’s kicking the crap out of *everyone*! If they had just made Toad like that in the comics he wouldn’t be considered such a joke. It probably helps that he doesn’t have the ridiculous costume in the film.

X-Men doesn’t have the deepest plot you’ll ever find, but it does a commendable job bringing the characters to life and setting up the world they live in. The sequels, X2: X-Men United and X-Men 3: the Last Stand are both better, in my opinion, though I enjoy all three films. X-Men is easily one of the best comic book films to come out in recent years, ranking up there with Sam Raimi’s Spider-Man in terms of quality.