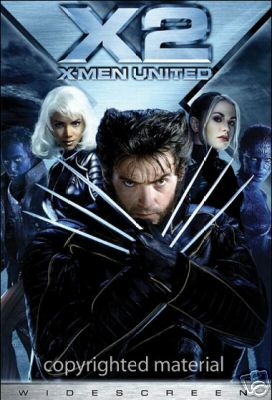 The number one factor which detracted from the quality of the first X-Men film was the fact that there was just too much to do. They had to establish the universe, introduce a slew of characters and work in a diabolical threat which needed foiling…all in about 90 minutes. That’s why, if you ask me, sequels tend to come across as a lot better. You have most of the introductory bits already taken care of, like origins and character backgrounds, so the lead focus can be on the story and the threat. And X2, now that all that other stuff is out of the way, is free to focus on the conflict. And it rocks!

Following the events of the first X-Men film, the villainous Magento (Sir Ian McKellen) is incarcerated in a plastic prison, the Brotherhood of Mutants has disbanded and Wolverine (Hugh Jackman) has taken a hiatus from the X-Men to go “find himself”. A new threat has reared its ugly head in the form of William Stryker (Brian Cox), a government official hellbent on wiping out every mutant on the planet. Stryker has developed a means to mind-control mutants, including the good-natured Nightcrawler (Alan Cumming) and the stonecold Deathstrike (Kelly Hu). Once Wolverine returns, the X-Men, along with trainees Rogue (Anna Paquin), Iceman (Shawn Ashmore) and Pyro (Aaron Stanford), deploy to investigate. They discover Stryker has mysterious ties to the Weapon X program and the origin of Wolverine. And if that wasn’t complicated enough, Mystique (Rebecca Romijn) busts Magneto out of prison. If there’s any chance of defeating Stryker, the X-Men and Magneto will have to work together.

I enjoyed the first X-Men flick, but I can’t deny that X2 is easily a superior film. The story is less Saturday Morning Cartoon-themed, with a threat that treats the audience with a bit more intelligence. Several pieces of continuity from the first movie are carried over into this sequel and the overall direction of the characters is quite a ways deeper (save for Storm, who once again gets shafted in the character-department).

A horde of new and newer characters are introduced in this film, injecting a level of freshness. In a show of remarkable continuity, the two actors who portrayed Pyro and Iceman during a quick cameo in the first film reprise their roles for much larger parts. Iceman’s budding romance with Rogue along with Pyro’s gradual turn to the darkside are two of the more interesting aspect of this installment. Nightcrawler is a perfect blend of his various characterizations. Often times, writers can’t decide whether they want to focus more heavily on his dedication to religion or his goofy, fun-loving nature. This interpretation of the furry blue teleporter maintains an excellent balance of his two natures. A shame he didn’t return for X-Men 3: the Last Stand. Mystique is much more than just a hot blue chick this time around, using her shapeshifting powers to their maximum potential. The way she busts Magneto out of prison is particularly clever.

A few characters end up losing a bit of background in the translation, unfortunately. Much like Sabertooth, Deathstrike’s relation to Wolverine is non-existant. She provides one of the better fightscenes in the film, but as a character, she’s terribly two-dimensional. As previously mentioned, Storm is given little development in this film. She’d ultimately see a major presence in the third film, but as far as X2 goes, she’s utterly forgettable. Cyclops and Jean Grey also fail to seize the spotlight, more-so Cyclops than Jean. Cyclops spends a good portion of the film under Stryker’s mind control and just doesn’t seem to do much. Jean’s quasi-mutual romance with Wolverine is developed a bit, but ultimately little comes of it. On the other hand, she’s a major player in the third film and this movie sets up her plot for that installment.

Fanboys can rejoice at all the in-jokes, cameos and references packed into this film. Keep any eye open for Dr. Hank McCoy (AKA the Beast) on a television news program. Sure, it contradicts his appearance in X-Men 3, but who cares? Characters like Siren make brief “you really have to be into this stuff” cameos, while Colossus makes his debut (though he won’t get a starring role until the third film).

X2 is quite possibly the perfect comic book film, or at least one of the best ever made. Of the three X-Men films made to date, it’s hands-down the best. I would recommend it to anyone who likes comics or just sci-fi action films in general.