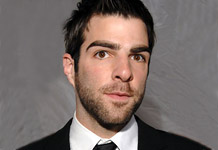 According to MovieHole sources the brain eating Sylar from “Heroes”, Zachary Quinto has been confirmed as the young Spock in JJ Abram’s upcoming Star Trek XI.

Being a big Trekkie, I have to say that I really dislike the idea of doing an “early adventure” of TOS crew, especially if they’re going to attempt to wedge it into the already established continuity, but if this is the route their going, then Zachary Quinto does seem like a really good choice for Spock.

I just wish they’d either do a complete reboot that ignores previous continuity, or start over in a future century that is free of continuity baggage and move Star Trek forward. Going backwards with the most forward thinking show in history just seems a bit wrong.

Expect more Trek news over the next few days, as Comi-Con International is gearing up.