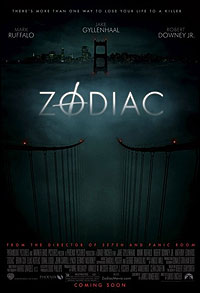 There were a lot of famous serial killers in the 20th century, many of which inspired movies and documentaries (such as Ed Gein, who inspired “Psycho” and “Silence of the Lambs”), but few were as intense, complex, long-lasting and all around fascinating as the Zodiac murders from the early 1970’s. The Zodiac murders inspired many movies and books (such as “Dirty Harry”), but there had never been a truly well-done retelling of the events behind the scenes until now. The film “Zodiac” is a marvelous and dark look at the investigation behind the Zodiac case in all its frustrating, soul-crushing, heart-stopping glory. It’s been a long time since a murder-mystery film has latched onto my attention and sucked me in from start to finish like “Zodiac” did.

In 1969, after the murder of a young woman, the San Francisco Chronicle began receiving threatening letters from the culprit, a serial killer calling himself “the Zodiac”. Enclosed with each letter was a bizarre cipher which presumably hinted at the Zodiac’s motives or state of mind. The Chronicle’s cartoonist, Robert Graysmith (Jake Gyllenhaal), is quite talented at puzzles and proceeds to decipher the Zodiac’s code. As the murders and letters continue, Inspectors David Toschi (Mark Ruffalo) and William Armstrong (Anthony Edwards) become mired in the bizarre and frustrating effort to find the killer’s identity and bring him to justice. The search seems futile as years pass and results thin out to nothing, yet as more time goes by more clues surface and the identity of the Zodiac may be just within reach.

First let me say, the trailers for this film stink. The first half of the theatrical trailer presents the film as a run-of-the-mill slasher flick, while the second half makes it look like it’s some sort of dark comedy. Pay no attention to those trailers, they were pieced together by imbeciles at Warner’s marketing department.

No, “Zodiac” is no horror movie (though it is rather frightening) and is certainly not a laugh-out-loud comedy. It’s a mystery-suspense flick which pits the audience on the side of the journalists and detectives struggling to identify the Zodiac. As the movie progresses you get caught up in their search; you get just as frustrated when leads don’t work out, just as angry when evidence comes up short and just as disappointed when all the suspicions prove incorrect as the characters in this film.

The movie takes you back in time and throws you into the maelstrom of news as it happens. For those of you who lived through the Zodiac insanity when it actually happened, this is as close as you’ll get to reliving it. The movie progresses chronologically, so there’s no skipping back and forth. As a result of this, the players are presented with what feels like uneven amounts of screentime. For example, at the beginning of the Zodiac case, the main character of the film, Graysmith, feels more like a back-up character supporting the Chronicle’s star reporter, Paul Avery (Robert Downey Jr.). Then, when the Zodiac killings really fire up, the movie focuses a great deal of time on the two inspectors, leaving Graysmith and Avery with hardly any screentime at all due to their actual irrelevance during this period of time. Then, when the investigation seems to end, Graysmith takes on the starring role and reawakens the case while Avery slips away into obscurity. Although this does seem rather uneven it maintains the reality of the ordeal and doesn’t pad out the film with fluff involving certain characters who did nothing of note for a few years. Every minute of this movie is important and director David Fincher doesn’t waste any of the audience’s time. I had to pee for the last hour of the flick but was too fascinated with the story to risk getting up for a second.

The acting and direction of the film leave little to complain about. There’s no over-bearing star power which detracts from the story and the atmosphere is quite spooky (major kudos on “the basement scene”). It’s a period piece and 1970’s San Francisco is brought to life especially well. Even the Paramount opening credit is the vintage 1970’s version. I suppose the only kind of “off” choice of casting was John Carroll Lynch as suspect Arthur Leigh Allen. He was fine in the movie but every time I see that guy all I can think about is the Drew Carey Show where he played a cross-dresser. But that’s probably just me and likely won’t distract anyone else in the audience.

“Zodiac” is without question the best movie I have seen this year and I’m sure will remain in my Top Five by the time December rolls around. It’s just that good. I couldn’t recommend it more.