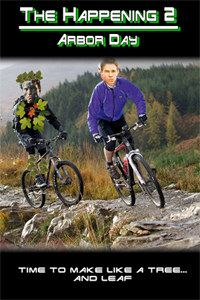 Synopsis: Elliot Moore (Mark Wahlberg) is once again stalked by plants, but this time they’re from the future. These future plants are out for blood and they’re self-aware. They send a time traveling plant-bot assassin, Fichus1000 (Arnold Schwarzenegger), to kill Elliot. His only options are to run, or fight. Since he’s humanity’s only shot, let’s hope he chooses fight.

Memorable Scene: Elliot is outside trimming his hedges when he notices something peculiar. He notices what look like various knives protruding from the bush. When Elliot goes in for a closer inspection he cuts himself on a knife and the hedge begins to rustle with what appears to be laughter. Elliot backs away slowly as he bleeds onto the knife-wielding hedge, as it laughs at him manically.

Plot: In the not too distant future, ArborNet, a once flourishing Botanical Preserve has become self-aware and is out for revenge on all of human kind. The flora and fauna of the world, tired of being simply garnish on plates, fed up with being peed on by dogs, or humiliated by being called “just a salad”, have started a revolt against the humans. We don’t know who launched the nukes first, us or them, but we do know they were the first to perfect time-travel. With their newfound power, they’ve decided to eliminate the only man to ever lead a successful resistance against them, Elliot Moore. ArborNet sends an Exterminator; model Fichus1000, back to destroy Moore and nip humanity’s only hope of survival in the bud.

Things start innocently enough. First ArborNet tests it time-traveling device by sending random plants to attack Moore. That’s when Moore’s house become overrun with plants… a bonsai tree in the living room, some sudden azaleas by the front porch, or a brand new peach tree in the yard. It’s only when an aggressive cactus appears in the shower that Moore starts to see the signs. Sadly, by this point, it’s already too late. Moore steps out of the shower, and finds his wife’s body on the floor with a bloody kitchen knife and a blueberry bush next to her lifeless body. Moore knows these botanical bastards mean business. As he rushes out of his home in a panic to find help, he meets Fichus1000 at his door. Moore realizes this leafy stranger isn’t here to comfort him. Elliot dashes out the back window to escape the plant-bot and runs for his life.

Moore finds himself in a thrilling eco-friendly bike chase up the mountainside path trying to escape the pursuing Fichus1000. Moore spots an abandoned greenhouse and decides to take shelter there with Fichus1000 hot on his trail. While Moore is hiding in an old planter he can hear Fichus1000 methodically searching for him. Finally confronted by Fichus1000 and the task to save humanity, the small town Pennsylvania teacher sees his chance, Moore stares Fichus1000 right in the eyes and says “make like a tree and leaf”. He then pulls the plug on a vat of weed killer, pouring 500 gallons of death on his nemesis sending him to his leafy fate.