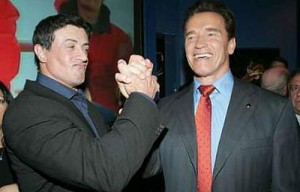 And more is what they’ll be getting with the announcement that Arnold Schwarzenegger has signed on to appear in The Tomb alongside Sylester Stallone. Arnie was actually offered the lead role in the movie but passed on it. Sly then got the juicy role. Reports say that Arnold will play supporting part in the movie. END_OF_DOCUMENT_TOKEN_TO_BE_REPLACED