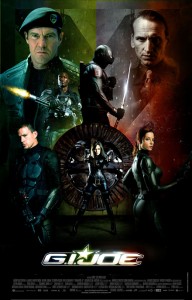 Let me tell you a secret.

I’m on a one-man mission to tell anyone who would listen that GI Joe: The Rise of Cobra sucked. It sucked ass so majestically that I’m using the DVD (Bluray’s too good for this movie) as a pooper scooper for my dog. Seriously. GI Joe was such a major disaster that even my five year old son, who loves his fair share of whiz-bang special effects blockbusters (he adored Transformers: Revenge of The Fallen), would rather tend to his virtual farm in Harvest Moon. It was that bad. And I whimper everytime I say this because Christopher Eccleston — my fave actor — is in this insult to good taste.

I really hoped that Stephen Sommer’s suckfest was the last we’ve seen of it. But apparently, the decent $300 million take GI Joe got was enough to actually merit a sequel (barf bag please).

I’m pretty sure a lot of people will be excited about news of a GI Joe sequel. Count me out though.