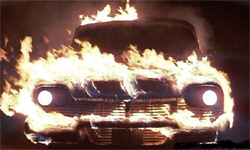 2. Christine (1983) – Christine is based on the novel by Stephen King, and is directed by John Carpenter. It stars Keith Gordon, John Stockwell and Alexandra Paul. “Christine” is a red and white 1958 Plymouth Fury that Arnie Cunningham finds and decides to restore. His friends find out that the car has a deadly past and that they need to destroy it to save Arnie. However, the car has other ideas and it goes on a rampage through town killing anyone who has ever damaged her. Whenever Christine is badly damaged, she is able to regenerate and make herself look as good as new. END_OF_DOCUMENT_TOKEN_TO_BE_REPLACED