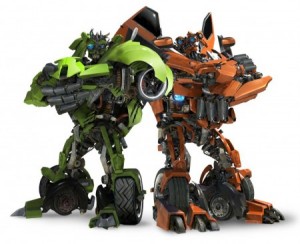 I’ve been very vocal about how much I hated Transformers: Revenge of The Fallen. I think it was a very sloppy movie and director Michael Bay thought that turning the volume way up in terms of the explosions and visual effects would be the winning formula for a good movie. Unfortunately, he also failed to bring the volume up on the storytelling. It was an indulgent mess that was just annoyingly loud and flashy. END_OF_DOCUMENT_TOKEN_TO_BE_REPLACED

Transformers 3 fans now have a real reason to get excited. Director Michael Bay has officially announced the release date for the third installment in the hit franchise.

In his official web site he revealed that a story has now been developed for the Transformers sequel and the release date is slated for July 1, 2011, a year earlier from the speculated 2012 release date.

Bay revealed that he had a meeting with Industrial Light and Magic and that he will be going to Hasbro’s headquarters with writer Ehren Kruger to talk about new characters for the movie.

Oh, and he also left a little note for Megan Fox, who has been badmouthing the Michael Bay and the Transformers franchise.

“P.S. Megan Fox, welcome back. I promise no alien robots will harm you in any way during the production of this motion picture. Please consult your Physician when working under my direction because some side effects can occur, such as mild dizziness, intense nausea, suicidal tendencies, depression, minor chest hair growth, random internal hemorrhaging and inability to sleep. As some directors may be hazardous to your health, please consult your Doctor to determine if this is right for you.”

Hilarious, and just slightly upped Bay’s cred for me.

According to Bay’s official website, he will be meeting with Steven Spielberg and Ehren Kruger (producers of the franchise) to discuss the sequel. The plan is to release the third installment in Summer 2011 or 2012.

Bay has also indicated that he will possibly be directing two movies before he puts Transformers 3 on his schedule. One of these movies will be another sequel, Bad Boys 3.

Good news for Transformers fans. Principal photography for Transformers: Revenge of The Fallen has officially wrapped up. This means the movie is right on track for its June 26 bow despite having to stop filming for one month to allow star Shia LaBeouf to recuperate from his arm injury.