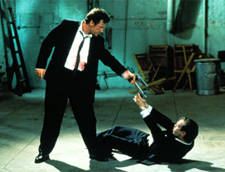 In the new flick Kick-Ass starring Aaron Johnson as Dave Lizewski (Kick Ass) and Nicholas Cage as Big Daddy, a warehouse is the setting for an amazing triumph of the goodies v the baddies. In the famous warehouse scene Big Daddy takes on the bad guys and sets fire to the warehouse. END_OF_DOCUMENT_TOKEN_TO_BE_REPLACED