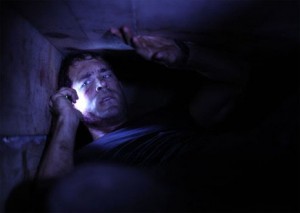 Ryan Reynolds’ star looks like it’s continuing its trajectory towards stardom. The guy has proven to be a great comic actor with the slew of well-received roles that he’s gotten of late. The writers of Wolverine may have ruined the character of Deadpool but Reynolds made the character a near-perfect interpretation of Deadpool’s deadpan, snarky character (until, of course, that atrocious reveal at the end). He has also proved that he can hold his own with superstars as evidenced by his well-loved performance opposite Sandra Bullock in The Proposal. The guy’s already beginning to reap the benefits of his Next Big Thing status by snagging another comic book based movie. He’ll officially be donning the ring of The Green Lantern for the new movie on the popular DC Comics character.

What he haven’t seen from Reynolds much though is a serious role. He’s apparently got that thing covered too with his new movie Buried. The thriller, helmed by Rodrigo Cortes, tells the story of Paul, an American contractor who’s working in Iraq. Paul gets in the middle of an attack by a group of Iraqis and finds himself buried inside a coffin. With just a lighter and a cellphone, he must find a way to escape before his time runs out.

It’s a great premise for a movie although it’s a tired concept. It’s been done in the Quentin Tarantino-directed episode of CSI. And the concept also reminds me of the movie Spoorloos. Will Reynold’s prove to be a versatile actor to tackle such a serious role? We’ll soon find out when the movie is released.