Addiction comes in many forms. There are behavioral addictions, genetic predispositions toward addictions, substance addictions, chemical addictions; and famous people and/or characters in movies are driven by those concepts the same as everyone else. On the big screen, they get a little extra theatrical rubdown, but that’s not to say those stories are larger than the ones that go on in everyday life.

Five movies that have addiction themes of note include “Thirteen,” “Fear and Loathing In Las Vegas,” “Blow,” “Easy Rider,” and “Trainspotting.” Each deals with primary characters with addictive tendencies, and each is a window from one set of creators to different sets of observers. 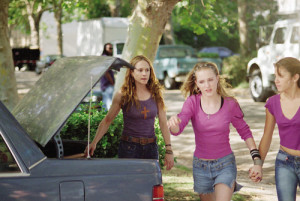 Sometimes movies about addiction end up circling back around to concepts of mindfulness and meditation, in one form or another. “Thirteen” eventually comes full circle with the pressures of popularity, sex and drugs, and ultimately lands on the idea of being present, especially as a young teenager. It’s easy to see how people in the main characters’ situations would end up with addictive tendencies once you see the pathways laid out in this manner.

Fear and Loathing in Las Vegas

“Fear and Loathing” gives the addict a paranoid edge, and through brilliant storytelling mixed with the writing style of Hunter S. Thompson, the cinema version makes people want that lifestyle more than anything else, and also makes them want to stay as far away from it as possible. Whereas many times addiction is shown to be problematic, in a more fantasy-styled world, it can be seen more as entertaining from the outside, if somewhat painful from the inside, and potentially expensive, depending on your level of resourcefulness.

In movies like “Blow,” cocaine addiction is explored, and the relationships between all of the people who are involved, from buyers and sellers, to family members and even strangers. The story is supposed to be based on real events, so it gives a dire warning to people who think that the lifestyle is glorified from beginning to end.

“Easy Rider” took a bizarro turn through a specific cultural era, and showed a kind of established journey that many people were extremely uncomfortable with, because they didn’t understand what created the storyline, or how the idea of the anti-hero continued flowing through the overall narrative. One could potentially even say it was more about addiction to an idea, or ideal of life, than a drug.

“Trainspotting” is a cult favorite among many people because it shows a lot of the dark side of hard drug addiction. People who have been through that stage of their life will connect with the characters in a way that is very limited in other movies about similar topics.