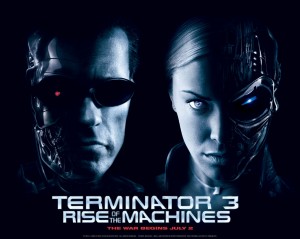 Celebrity gigs – which stars are contractually obligated to do- make being in the movies seem like it’s all about the art of movie making; these days, however, it’s all about the deal. The perfect example of this is the contract Arnold agreed to for Terminator 3: The Rise of the Machines. The contract was put together by Jacob Bloom, Schwarzenegger’s lawyer. It took at least twenty-one drafts and ended up running thirty-three pages long.

At the time, this contract set records for ways in which it benefitted the actor. Bloom made sure that Schwarzenegger would get $29,250,000 whether the movie was actually made or not. For every week shooting ran over schedule, he would get an additional $1.6 million. To top it off, there was a “perks package” – $1.5 million for things such as private jets, deluxe suites on locations, twenty-four hour limousine service, a fully equipped gym trailer and more. Schwarzenegger also had the right to decide who worked with him. He had his choice of director, principal cast, hairdresser, stand-in, personal chef, and others.

Producers of T3, Mario Kassar and Andrew Vajna, had little choice but to agree to Schwarzenegger’s terms. His image was indelibly linked to the fictional robot because of TV reruns of the Terminator 1 and Terminator 2, not to mention the video games based on the movies. Getting Arnold to star in Terminator 3 was crucial for Kassar and Vajna in order to get the funding they needed to make the film. The three distributors who had agreed to finance the film – Warner Bros., Toho-Towa and Sony Pictures – only agreed to do so on the condition that Schwarzenegger would star as the robot.

Schwarzenegger’s contract insured that he got every possible tax advantage. Oak Productions, Inc., a corporate front owned by  Arnold , was to be paid the money for the making of the film, not  Arnold himself. In return, Oak Productions would lend the services of Schwarzenegger to the production. This helped him manage his exposure to taxes. For example, Oak Productions entered into a tax-reimbursement scheme with the production to avoid tax liabilities that might occur abroad. In return, Schwarzenegger agreed to be additional days of shooting outside of the scheduled shooting time.

After all of Schwarzenegger’s contractual demands were met, the budget of the film reached $187.3 million, making it the most expensive independently produces movie at that time. An additional $90 million was also spent on marketing and advertising. The box office gross of Terminator 3 was $433 million.

Ironically, once the Terminator franchise was on its feet again, Arnold was no longer needed for further sequels. Kassar and Vajna sold the rights to the franchise to Halcyon, a game company, in 2007. Halcyon produced the first of three sequels, Terminator Salvation, in 2009. Even without Schwarzenegger, the film did almost as well as Terminator 3 at the American box office.