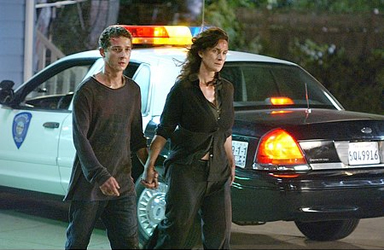 Disturbia is hitting movie screens this weekend & the film doesn’t look half bad.  Shia LaBeouf & Carrie-Anne Moss star in this flick about a young man under house arrest who becomes a voyeur of sorts & suspects that one of his neighbors is a serial killer.

Yeah, happens to me all the time.  Now, I know how most of you feel about the Matrix‘s Carrie-Anne, she’s a little on the annoying side, but I think we can all agree that we have found the perfect role to love/hate her in.

Also coming to the screens is a rather sexy number called Pathfinder.  The movie focuses on a Norse warrior who was incidentally raided by Native Americans & wages his own personal war to stop the Vikings invasions.

That’s pretty sweet of him to take that all on himself, remind me to send him a thank you card.  Skip this one, unless you’re just going for the eye candy.

Halle Berry’s Perfect Stranger is coming to the box office this weekend.  Berry stars alongside Bruce Willis in this thriller about a man who might just be responsible for Berry’s friend’s murder.

Kind of a murder in the red barn kinda thing, looks decent enough & any movie where you can gaze at Halle Berry is a-okay in my book.

Comedian Eddie Griffin has a new film this weekend, Redline is about a group of drivers that find themselves caught in a competition for a large illegal cash prize.  Just do what I do with any Griffin movie, skip it & burn the DVDs when they come out.

Lastly, Slow Burn will be sharing its debut at the movie theaters this weekend.  The Ray Liotta film surrounds a district attorney who is trying to make heads or tails of a tough case involving the assistant D.A., a gand lord & a stranger.  Sounds like a DVD rental to me.

Whatever you choose to spend that hard-earned cash on this weekend, enjoy & see you bright-eyed & bushy-tailed on Monday.