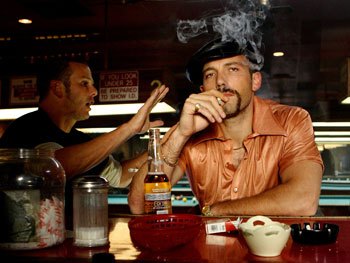 We have a few hot ones coming out in the theaters this weekend, but the most highly anticipated (& hyped) movie is Smokin’ Aces.  I can’t remember another time that I saw that many trailers on TV.

Smokin’ Aces stars Ben Affleck & Andy Garcia in a movie Smokin’ Aces about characters who collide with the FBI when a Las Vegas mob boss takes out a large contract on a magician’s head of all things.  Looks to be somewhat tasty.

Also out this weekend is Blood and Chocolate, where a teen werewolf must choose from her love of a human & betraying the werewolf code.  A thumbs down perhaps?

Catch and Releases starring Jennifer Garner as a woman who must deal with the sudden death of her husband opens this weekend; as does spoof movie Epic Movie which takes on recent blockbuster films & slams them.

You tell me- Where are you taking that date this weekend?  Catch and Release or Smokin’ Aces?  I have a sneaking suspicion it may just be the latter.